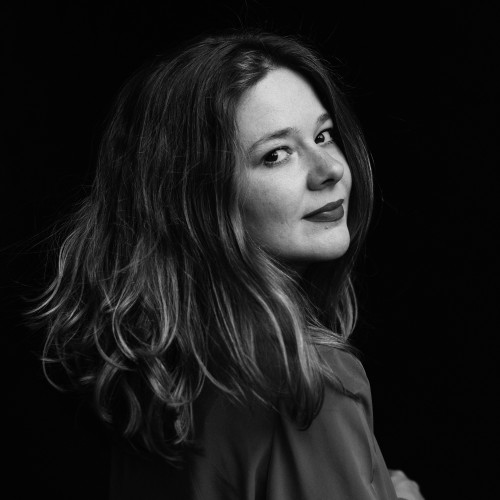 Born in Hamburg in 1990, Charlotte Sprenger studied Applied Cultural Studies at the Leuphana University of Lüneburg. During her studies, she gained her first experiences of working at the theatre at the Deutsches Theater in Berlin and at Thalia in Hamburg.

From 2013 to 2016, she worked as an assistant director at the Cologne Schauspiel, which is where she staged her first productions including ‘The red shoes / One Love. Two people’, a compilation of two Fritz Kater texts and ‘From Moscow to Pietushki’ by Venedikt Jerofejev.

Charlotte Sprenger is part of the ‘BRITNEY’ curation team, which is responsible for the outdoor performance space at Offenbachplatz at the Cologne Schauspiel. She staged the German premiere of ‘Little One’ by Hannah Moscovitch during the 2016/17 season, followed by the world premiere of an adaptation of Jonas Hassen Khemiri’s novel ‘Everything I Don’t Remember’, which was invited to the 2018 ‘Radikal Jung’ festival in Munich.

She staged two more productions at the Basement Theatre in Cologne: During the 2016/17 season she staged ‘The Animal Kingdom’ by Nolte/Decar and during the 2017/18 season she presented ‘Clockwork Orange’ based on the novel by Anthony Burgess, which was awarded the Heidelberg Theatre Prize in 2018. Sprenger staged an adaptation of Bov Bjerg’s novel ‘Auerhaus’ at the Linz State Theatre in the spring of 2018.

In January 2019, she made her Thalia debut on the Gauß stage with her production of ‘Before the Feast’ based on the novel by Saša Stanišić. In August 2020 her production of ‘Opening Night’ by John Cassavetes celebrated its premiere as an open-air performance, and in May 2021 she staged ‘The Politicians’ by Wolfram Lotz.